Bbnaija star, Emmanuel Umoh has shared a VIDEO of himself and a mystery lady on a dinner date on his Instagram story. This is happening weeks after he publicly denied being in any relationship with former co-housemate, Liquorose.

See screenshots from his VIDEO below: 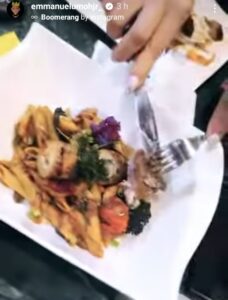 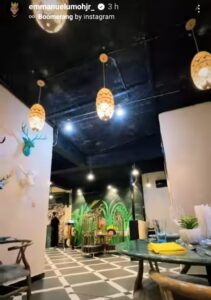 It could be recalled that after Liquorose revealed that she found another girl in Emma’s room, Precious who is a Ugandan, reveal that nothing happened between them.

According to her, she and Emmanuel have been friends for a long time.

She also revealed that Emmanuel told her he is single and invited her over to his hotel room because she was also lodged in the same hotel.

While in his room, Liquorose came over and knocked on Emmanuel’s door for over two hours, this got her angry and told Emmanuel to open the door so she could also leave the room.

She further stated that she is in a relationship, and didn’t sleep with Emmanuel, and Liquorose fans should stop attacking her, rather than attack Emmanuel who caused all of this.

Now, Precious has thrown a shade at Liquorose.

In her post, the lady noted that Emmanuel Umoh is not dating anyone so he has a right to chill with anyone he wants.

Throwing a shade at Liquorose, the lady noted that the reality star was the only person in the relationship since Emmanuel claimed he was single.

She then advised her to allow a man to chase her not the other way round.

“Emma is not dating anyone he has a right to chill with anyone he wants maybe she was the only person in the relationship. Allow a man to chase you not the other way round” She wrote via insta Story. 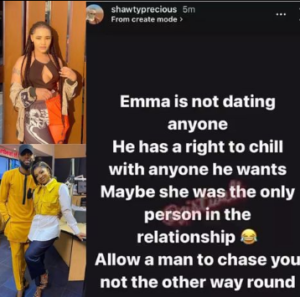 ALSO READS; “You Shall Be 10 Times Greater Than Me” -Yul Edochie Showers Prayers On His Son With Second Wife, Judy Austin On His First Birthday (Photos)